The much awaited and the most significant update to the Open Enterprise Server (OES) product line over the last 10 years is now generally available.  And the verdict is out too: feedback from early adopters has been very positive.  It’s a solid release, smooth upgrades, and a lot of things big and small, with something for everyone to cheer about and take advantage.

OES 2015 is based on SLES11 SP3, a proven base platform that also runs OES11 SP2.  Considering the huge changes that went into OES 2015, all the way from bottom of the stack to the top, we needed a stable base to develop and qualify the couple of million lines of code that was added or modified.

Let’s look at some of the focus areas and key features of OES 2015.  Most of the new capabilities included in OES 2015 are focused around the File stack. 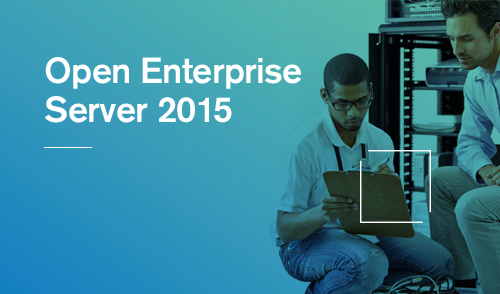 The stand-out feature with OES 2015 is the native integration of the NSS filesystem with Active Directory.  Directory consolidation happens for various reasons, such as mergers and acquisitions, eliminating complexity, etc.

If an OES customer previously chose to consolidate their identities on Active Directory and they wished to retain, leverage and grow their investment in NSS (for all its unique features and advantages) the only one way to do it was by using an IDM solution and synchronising the identities from the primary Active Directory to eDirectory for the NSS needs.

Though an IDM solution simplifies this to a great extent, given a choice, the preference is not to manage another directory just for the purpose of file access in NSS, and invariably that meant an expensive file system migration from NSS to NTFS.

Not any longer!  With OES 2015 the design and experience is all so simplified that in practice the end users are not going to notice any difference whether they are using CIFS to access NSS or not.  For those using NCP today, they will have to make the switch to CIFS to provide access for AD users but for them the experience will be simplified with single sign-on drive mapping to NSS shares.

All your existing storage pools and volumes can be enabled for AD access with simple changes.  The entire back-end storage infrastructure is enabled which means all your clusters, DFS junctions and DST deployments all continue to work for AD users, once those changes are done in a planned manner.

There’s also a cool new web based rights mapping utility which helps map the eDirectory rights on the filesystem to their equivalent AD users/groups.

Pretty much there’s everything in place for your users to logout as eDirectory users on a Friday evening and come back on Monday morning and login in as AD users; and still find they have access to all the data they have always had access – no more, no less.

With the rate at which data and content is getting created these days, the existing limits of 8TB pools and volumes for NSS are not sufficient for certain classes of consumers such as media companies.  With OES 2015 the new theoretical limit for an NSS pool/volume is 8 ExaBytes.

Though we don’t practically expect anyone to create pools or volumes larger than a few hundred terabytes, we did come across a few use cases for secondary storage and data dumping, where backup is not really a primary concern.  In such cases, people were planning to create much larger pools and volumes.

The NCP protocol and the NCP Client have been enhanced to remove the old limitations.  AFP and CIFS already supported access beyond 8TB.

Perhaps, the most significant and relevant update sought after by customers across the board was the support for SMB Version 2 in the Novell CIFS stack.  SMB/CIFS is increasingly becoming the de-facto file access protocol across many client platforms including Mac and Linux, apart from Windows.

With this update, we are also delivering about 30% to 40%, improvement in performance over our SMB v1 stack.

This is another update which eases the life of an NSS administrator who has a tough time finding and managing all the DFS junctions in a volume and map the source junction and target volumes they point to.  The update to the DFS iManager plug-in now allows you to run a report and save it as a csv file to have an easy look and record of the junctions in the NSS environment.

There are numerous other improvements and minor enhancements in all areas: direct print accounting support; browser independent printer installation, etc.  Many field issues have also been resolved which improves the stability and reliability of the product.

As an example, file access authorisation in CIFS, which was done at the CIFS layer, has been moved down to NSS which avoids caching and duplication and improves consistency and coherency.

In addition to these great capabilities in OES 2015, there are other things of note which may be of interest to you:

Cluster Services Promotion. You can now get 4 additional cluster nodes at no additional cost, if you meet certain criteria.  Refer to the cluster services promotion on the web.
Inactive User allowance has been introduced (120 days not logged in or disabled users) and Limited User License (used only for authentication).  Refer to the EULA for details
Archive and Versioning Services and QuickFinder are no longer part of OES 2015.  However, they will be supported on the OES11 line.

We have had customers deploying OES 2015 in production even before it became generally available and feedback has been encouraging.  One customer upgraded their 70+ servers to OES 2015 inside 12 weeks of release.  These speak to the ease of upgrades, and reliability of the product.  In fact another customer went on to comment that OES is now almost NetWare-like in terms of reliability and uptime.

The first support pack for OES 2015 focuses not just on closing the gap in some of the areas in OES 2015 but also has some cool new stuff which can immediately be put to use.  Here are the highlights of SP1:

We hope to have this released in Q2 of 2016 and expect to share more on this in the next issue of Open Horizons Magazine and you should have chance to play-around with it in the labs at the  Open Horizons Summit in April at Budapest.

We have also started investigation of running OES on SLES12 which is where we will focus our efforts after the release OES 2015 SP1.  eDirectory 9, which is currently in Beta is also likely to find its way into OES with this release of OES on SLES12.

It’s also likely that with that release, we’ll start making the SLES patches for OES servers available via the OES channels.  Having just one channel for all updates to an OES server avoids the issues that sometimes creep in - like  that Apache update on the SLES channel broke my iManager!

This article was first published in OH Magazone, Issue 32, January 2016