Two very large fines from the UK’s Information Commissioner’s Office (ICO) have again focussed minds on GDPR and data protection in general. British Airways parent company International Airlines Group (IAG) has been notified by ICO of its intention to fine it £183M (€200M) for the data breach relating to its web based booking system. The details of this breach were discussed in the previous issue of OH Magazine. (GDPR: First Days, OHM 42, p31-33, 2018.3). This fine amounts to 1.5% of IAG’s annual revenue; it could have been up to 4%. IAG is appealing the fine and we must wait for the final outcome.

ICO have also fined Marriott Inc. the international hotels group a total of £99M (€115M), for a data breach in its Starwood chain of hotels. In fact the breach pre-dates GDPR and before Marriott completed their takeover of Starwood but it was not reported until GDPR was in force. Marriott have co-operated with ICO throughout and are now appealing the decision. Although Marriott have major business interests in Europe they are an American corporate.

Previous to these two major cases the largest fine so far made was Google’s $50M fine by France’s data protection authority CNIL. Essentially it was due to a complaint by Austrian and French activist groups that Google’s Android phone setup process included the creation of a Google account, that customers were not made sufficiently aware of and lacked any consents for opt-in. 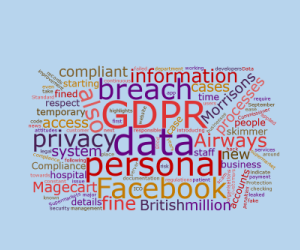 Throughout Europe there have been several other interesting cases.

More information is available at www.enforcementtracker.com. These cases show that data protection authorities are not just concentrating on the high profile breaches but also the many day to day data breaches of personal information.

In total in the first 9 months since the GDPR came into operation 206,326 cases were reported under the new law from the supervisory authorities in the 31 countries in the European Economic Area. About 65,000 were initiated on the basis of a data breach report by a data controller, while about 95,000 were complaints.

Some 52 per cent of the overall cases have already been closed, with 1 per cent facing a challenge in national courts. Total fines came to €55.96m, of which €50M related to the Google case in France. In comparison in the UK, the ICO issued fines totalling £3M in the year preceeding GDPR - which included a £500,000 fine for Facebook. The ICO have indicated that the equivalent Facebook fine under the GDPR could have been over £1 billion, and now the company faces a $5B fine from regulators in the USA. (https://www.theregister.co.uk/2019/03/14/more_than_200000_gdpr_cases_in_the_first_year_55m_in_fines/)

To recap, under the GDPR, (https://gdpr.eu/fines/) fines are administered by the data protection regulator in each EU country. They will determine whether an infringement has occurred and the severity of the penalty. Ten criteria are used to determine whether a fine will be assessed and in what amount:
Gravity and nature — The overall picture of the infringement. What happened, how it happened, why it happened, the number of people affected, the damage they suffered, and how long it took to resolve.

GDPR is now up and running. This article has concentrated on the penalties being issued as a result of investigations undertaken by the national data protection authorities. Many cases revolve around improper company policies on data handling or simply not knowing where your data (paper or stored on computer) is located. Data requires management! Some of these fines could potentially put the companies out of business, although this is not the intention of the authorities.

The higher profile cases are mainly malicious data breaches or caused by inadequate testing of software. Make sure your systems are fully patched and tested, including against hacker threats.