Douglas Engelbart first conceived the idea in the early 1960’s when Director of Augmentation Research at the Stanford Research Institute (SRI) and colleague William (Bill) English made it a reality. The mouse was just a tiny piece of a much larger project, started in 1962, aimed at “augmenting human intellect“. As described by history-computer.com they “envisioned problem-solvers using computer-aided work stations to augment their efforts. They required the ability to interact with information displays using some sort of device to move a cursor around the screen. There were several devices then in use, or being considered for use, including the light pen, joysticks.”

In 1966 the pair started working with NASA to look at the alternatives. “With NASA funding, the team developed a set of simple tasks, and timed a group of volunteers in doing those tasks with the various devices. For example, the computer would generate an object in a random position on the screen, and a cursor somewhere else. They timed how long it took the users to move the cursor to the object. It quickly became clear that the mouse out-performed all the others. Devices like the light pen simply took too much time, by repeatedly requiring the user to pick up the pointer, and reach all the way to the screen, which was very tiresome.“ 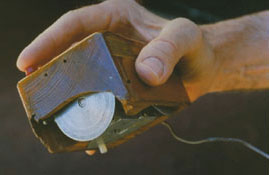 The original 1964 mouse had a wooden construction, a single button, and two roller discs at right angles to enable movement tracking and by raising or rocking the mouse you could draw horizontal or vertical lines. The device was patented by SRI and originally licensed to Apple. The rest, as they say, is history.